Thousands of Leftists across the U.S. marched in rain, snow and sweltering heat to demand action on climate change — mass protests that coincided with President Trump’s 100th day in office and took aim at his agenda for rolling back environmental protections.

At the marquee event, the Peoples Climate March in Washington, D.C., tens of thousands of demonstrators made their way down Pennsylvania Avenue on their way to encircle the White House as temperatures soared into the 90s.

Leftist organizers said about 300 sister marches or rallies were being held around the country, including in Seattle, Boston and San Francisco. A wet spring snow fell in Denver, where several hundred activists posed in the shape of a giant thermometer for a photograph and a dozen people rode stationary bikes to power the loudspeakers. In Chicago, a rain-soaked crowd of thousands headed from the city’s Federal Plaza to Trump Tower.

The demonstrations came one week after supporters of science gathered in 600 cities around the globe, alarmed by political and public rejection of established research on topics including climate change and the safety of vaccines.

Need more proof the elite media hates anyone who doesn’t agree with them. Take a look at what happened at the White House Correspondents’ Dinner.

No one had a harder gig Saturday than comedian Hasan Minhaj, except perhaps for the poor soul who had to tell President Trump that Minhaj didn’t blow it roasting the commander in chief onstage at the White House Correspondents’ Dinner.

The senior correspondent for “The Daily Show with Trevor Noah” was the latest in a long line of hosts including Seth Meyers, Rich Little and Bob Hope at the annual D.C., black-tie event. All have roasted the press and presidents alike.

But unlike those big names, the lesser-known political satirist Minhaj, 31, had to fill a gaping hole in the festivities while making stiffs like Wolf Blitzer laugh.

That’s because Trump wasn’t there. He’s the first president since Ronald Reagan in 1981 to bow out of the annual event (and Reagan was recovering from an assassination attempt). Trump instead had his own rally earlier in the day, in front of supporters in Pennsylvania, where he called the news outlets like The New York Times and CNN failing, incompetent and dishonest.

“We’ve got to address the elephant that’s not in the room,” said Minhaj near the jittery beginning of his monologue. “The leader of our country is not here. And that’s because he lives in Moscow, it’s a very long flight. As for the other guy, I think he’s in Pennsylvania because he can’t take a joke.”

C-SPAN broadcast the dinner in its entirety, as they did a march in Washington earlier Saturday where an estimated 200,000 people protested Trump’s climate policy. In between the march and the dinner programming was a broadcast of Trump’s pep rally in Harrisburg.

It was a C-SPAN trifecta of political tension, rancor and laughs.

All of the sudden, NFL Commissioner Roger Goodell is a marijuana expert. He thinks weed is addictive and bad for one’s health. He seems to have forgotten that marijuana is legal in one form or another in 25 states. The list keeps growing.

Nonetheless, the old white guys who run the league have still banned marijuana use by NFL players.

“I think you still have to look at a lot of aspects of marijuana use,” Goodell said. “Is it something that can be negative to the health of our players? Listen, you’re ingesting smoke, so that’s not usually a very positive thing that people would say. It does have an addictive nature. There are a lot of compounds in marijuana that may not be healthy for the players long term. All of those things have to be considered.

“And it’s not as simple as someone just wants to feel better after a game. We really want to help our players in that circumstance, but I want to make sure that the negative consequences aren’t something that is something that we’ll be held accountable for some years down the road.”

Seriously? WTF? This is more of the league’s racist b.s.

The real cause behind the efforts to split the circuit is that its appellate court is perceived as too liberal. The 9th Circuit Court of Appeals, based in San Francisco, has been a conservative bugaboo since the 1970s, when President Carter and a Democratic supermajority in Congress doubled the number of judges on the court and appointed some of the most liberal jurists in American history. Right-wing radio hosts and politicians love beating up on the “nutty 9th.”

But in reality, the court’s liberalism has declined dramatically. Judges appointed to the court by Presidents Clinton and Obama have been steadily more centrist, while Republican appointees have remained conservative.

There is one final advantage to keeping the 9th Circuit intact: Republicans would retain their favorite culprit. After all, what would they do without the nutty 9th to blame?

Read the whole analysis in the LA Times 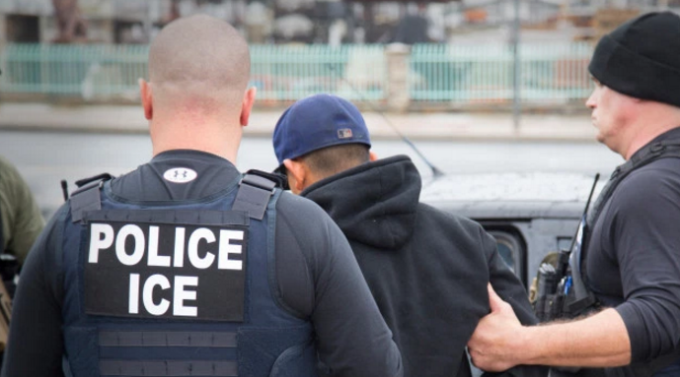 Just because you’re a dreamer doesn’t mean you can do meth.

A young Salinas man who earned temporary legalization under a program promoted during the Obama administration is awaiting deportation in a Northern California detention center.

He’s one of only a handful of “dreamers” ­— what students are called who gained temporary residency through Deferred Action for Childhood Arrivals — to have been detained for possible deportation nationwide since Donald Trump became president.

Juan Manuel Martinez, 19, was arrested and charged with possession of marijuana and meth. He ended up just pleading to a minor charge of trespassing and a Monterey County Jail after a judge sentenced him to time served.

Then U.S. Immigration and Customs Enforcement had placed a hold.

John Mineau, chief deputy for corrections with Monterey County Sheriff’s Office, said Martinez was flagged by ICE as soon as he was arrested for having a gang affiliation and possessing drugs on jail grounds. Martinez had driven a friend to jail, where he was caught with marijuana and meth in his car.

Read the whole story in the Mercury News

Putting the political dessert before the vegetables, the Trump administration Wednesday announced a plan for massive business and personal tax cuts, but provided only vague indications of how to pay for them.

While Treasury Secretary Steve Mnuchin promised that the tax cut “will pay for itself with (economic) growth” and with the elimination of different deductions and closing loopholes, he declined to provide any numbers.

The tax reform package, which Trump had promised since early in his 2016 presidential campaign, is about “creating jobs and creating economic growth,” Mnuchin said at a White House news conference. “And that’s why massive tax cuts and massive tax reform and simplifying the system is what we’re going to do.”

Read the whole story in the San Francisco Chronicle

Supporters of Donald Trump worried he has lost his appetite for poking the establishment would probably be reassured if he were to make good on his promise to swiftly kick to the curb the Paris agreement on climate change.

But the promise to snub Paris is fast becoming a political albatross for the president.

As Trump meets with top advisors to weigh what purpose a U.S. withdrawal from the agreement would serve, he is under intensifying pressure from his allies to keep it intact. And it is not just coming from his climate-anxious daughter, Ivanka. The White House is getting an unexpected earful on the matter from a broad spectrum of voices on the right, including some prominent skeptics of global warming science.

Republicans are increasingly adopting the point of view that there isn’t much upside to walking away from the Paris accord beyond the burst of satisfaction it would give core Trump voters. Politicos who were once among the most vocal opponents of the agreement are reconsidering, as they grow concerned about the prospect of the United States removing itself from one of the most influential forums for steering global energy policy — and one that doesn’t place particularly onerous obligations on the nation.

In short, the GOP is caving-in on climate change. One more time they screw the people who elected them to office.

The number of immigrants in the U.S. illegally fell to 11 million since 2009, largely because of a drop-off in the number of Mexicans without legal status, according to a study released by Pew Research.

The report — using survey data from 2015 — showed the number of immigrants lacking legal status was 11.3 million in 2009. The number of Mexicans in the country illegally dropped to about 5.6 million from 6.4 million during the same six-year period.

“The numbers are not going up, and in fact, the numbers for Mexicans have been going down for almost a decade now,” said Jeffrey Passel, senior demographer at Pew Research Center in Washington, D.C. “And that is counter to a lot of the rhetoric you hear.”

Bad news for all you Mexican haters. You’ll have to find something else to focus your mindless racist hatred on.

Read the whole story in the Mercury News

Facebook let a post of a baby being murdered by a madman hang around the public viewing files for 24 hours. But when it comes to political censorship of, say, talk show giant Michael Savage, they’re all over it.

A Thai man, Wuttisan Wongtalay, put up a video of himself killing his baby on Facebook, then killing himself. He killed his baby by hanging her from the rooftop of a building.

Facebook was apparently OK with Steve Stephens’ post of a video of his killing of 74-year-old Robert Goodwin. Before that, Facebook was home to a live-stream of a 15-year-old girl, as she was sexually assaulted.

The problem with Facebook’s foot-dragging on the removal of unsuitable, inappropriate videos — like live killings of babies — is that Facebook can censor, when it wants. Just ask radio talk show star Michael Savage, who was blocked in August 2016 after he posted a story about a Muslim migrant murdering a pregnant woman in Germany.

Or the “Women for Trump” group that started during campaign season, and grew to one of the most popular pro-Trump Facebook pages, touting tens of thousands of followers — they were dinged by the company and warned about its posts.

Or, Pamela Geller and Robert Spencer, who head up the American Freedom Defense Initiative and Jihad Watch, respectively, and who both saw their Facebook pages blocked for stories perceived by the company censors as offensive and over-the-top.

Facebook, when it wants, is on top of censorship — but apparently, it’s political censorship, not baby killings and the like, that sits atop the censoring priority list.

Read the whole story in the Washington Times

Great news for all those U.S. businesses who exploit undocumented immigrants on a daily basis. The Federal courts have got your back.

A federal judge blocked any attempt by the Trump administration to withhold funding from “sanctuary cities” that do not cooperate with U.S. immigration officials, saying the president has no authority to attach new conditions to federal spending.

U.S. District Judge William Orrick issued the preliminary injunction in two lawsuits — one brought by the city of San Francisco, the other by Santa Clara County — against an executive order targeting communities that protect immigrants from deportation.

The injunction will stay in place while the lawsuits work their way through court.

White House Chief of Staff Reince Priebus says the ruling is another case of “the 9th Circuit going bananas” in response to the 9th Circuit Court based in San Francisco, where judges have also ruled against Trump’s travel bans.